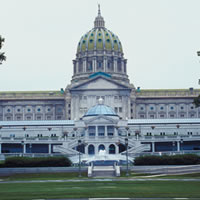 Dr. Ken Wolensky is a published writer and historian. He is President of The Pennsylvania Historical Association.