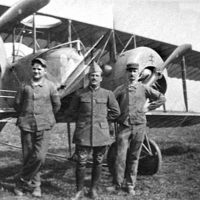 We often think of military pilots as having just popped onto the scene during the First World War, but it was not so. Because aviation was so new, most pilots were individuals trying stunts at early airshows before they were called up. Others joined the service because it was the only way to learn to fly. But how did they all fit into the armies of the Great War? This session looks at the peculiar world of early flying.